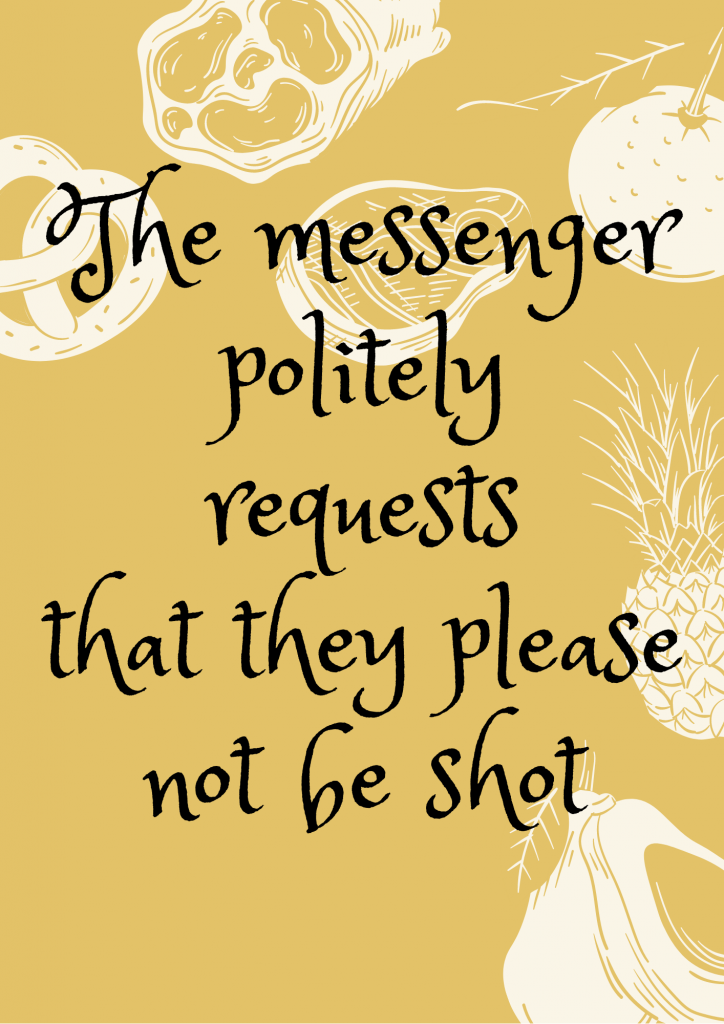 Don’t Shoot the Messenger is an oft-repeated metaphor which describes the act of pointing fingers at the bearer of negative news. In the past, a messenger was sent to tell the King of the outcome of a battle. If the battle had been lost, very often the messenger was killed, even though that did not affect the outcome of the battle.

The messenger is often not the “expert” who knows “what to do” but is the one who carries the message from the “expert” to those who need to know what must be done. They may be a balladeer or a troubadour, singing a song, or a journalist posting an article on alternative points of view, or a blogger sharing a post, for instance.

If the messenger is telling us the truth, then we must face it. Shooting the messenger does not affect the battle result and we ought to thank those who are sharing what may be an uncomfortable truth. Alternatively, we may need to open a discussion to see whether the message is correct or not. This does not necessarily mean opening a discussion with the messenger but it definitely means listening to or learning about what the originator of the message said or meant, much as we may not wish to.

How Do We Shoot The Messenger These Days?

Messengers, hopefully, do not generally get shot these days but they are definitely targeted, to try and dilute or destroy their message. Sometimes they are targeted by trolls, whose job is to stop a different message being heard, sometimes by well-meaning gatekeepers and sometimes by the terrified, who want a single straight path that everyone must follow.

Look at the words which may be used about the message or the messenger. These are often the ones used in propaganda. Did you think propaganda was an old WWII term? No, it is very much alive and kicking these days, in fact you can join a free on-line course from universities to learn about propaganda and ideologies right now!

If someone says something and the term “quack”, “dinosaur”, “tin hat”, “anti —” or similar is applied, then the person applying that term is trying to stop you from thinking about the message by using words that have a negative connotation. Or they may be trying to conflate one idea with another that you did not like, in order to make you not like the second idea.

Try the old syllogism, changed around as it sometimes is to check understanding:

Replace some of the words:

No, neither of them stacks up. But when a comment is “pushing your buttons” and trying to stir up an emotional response, instead of allowing logic and reason to be used, it is possible for faulty reasoning like this to pass unnoticed.

Why would they do that? Well, think about it. Use the critical thinking tool between your ears. You may still come to the same conclusion as you might have earlier but this time, you will know WHY you agree, as opposed to having been emotionally hijacked by negative terms used deliberately to confuse the message or to stop you listening to it.

These are also what are called “ad hominem” attacks, they attack the person (messenger), not the idea (message). After all, if you attack the message, you have to answer why you are attacking it. But if you attack (shoot) the messenger, by calling them a crank or a quack, you don’t have to explain why their message is wrong. An awful lot easier to shoot the messenger, rather than challenge the actual message? No, I am not calling them lazy, this is done deliberately because the desired message is not as cut and dried as everyone might like to believe.